in 2001 Beatle George
Harrison died of cancer.
Harrison was born on 25 February 1943 in the family home at 12 Arnold Grove, Wavertree, Liverpool.
His parents were Harold and Louise Harrison, who had roots in Ireland. They had three other children: Louise, Harry and Peter, all of whom were older than George. 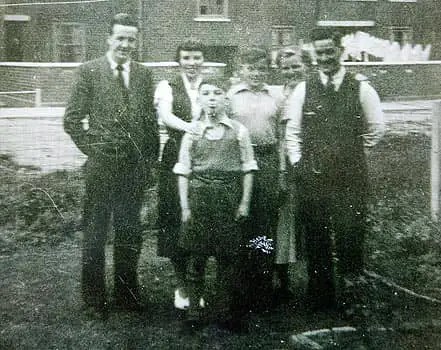 In 1950 the family moved to 25 Upton Green in Speke. George went to school at Dovedale Road, where he passed his 11 Plus and gained a place at the Liverpool Institute for Boys, a local grammar school.
He attended the Institute between 1954 and 1959. Not an especially gifted child academically, Harrison struggled as a student and left without any qualifications. He had trouble relating to his teachers, and insisted on wearing tight jeans and long hair, much to his parents consternation.

In 1959 Harrison formed a skiffle group, The Rebels, with his brother Peter and a friend, Arthur Kelly. Harrison’s mother bought him a guitar for £3, and the group’s debut gig at the British Legion club in Speke earned them 10 shillings.
Harrison considered becoming an apprentice engineer after leaving school, but music dominated his passions and he performed with a number of fledgling groups in Liverpool. In 1958 he met the Quarrymen, whose ranks included Paul McCartney, a friend of Harrison’s from the Institute.
Although Harrison was considered too young to join the group, he did fill in when their regular guitarist Eric Griffiths was unavailable. Eventually he was accepted as a full member, despite the reservations of the Quarrymen founder and leader, John Lennon.

Paul introduced me to George and I had to make the decision whether to let George in. I listened to George play and said, ‘Play Raunchy’ [a 1958 hit for saxophonist Bill Justis]. Then I said, ‘OK, you can come in.’
I couldn’t be bothered with him when he first came around. He used to follow me around like a bloody kid, hanging around all the time. He was a kid who played guitar and he was a friend of Paul’s which made it easier. It took me years to come around to him, to start considering him as an equal.

The band became Johnny and the Moondogs, and later the Silver Beetles. Their first trip to Hamburg in August 1960 took place while Harrison was just 17, and the Reeperbahn, the red light district where they played, proved an educative experience: “Everybody around the district were homosexuals, transvestites, pimps and hookers and I was in the middle of that, aged 17,” he said.
The first trip ended in Harrison’s deportation for working under-age. When they returned in March 1961 The Beatles had become more assured as performers, and in June cut their first single, My Bonnie, as the backing band for Tony Sheridan. For this they were paid 300 marks with no royalties.
At the band’s first recording session for EMI, producer George Martin tried to ease the band’s nerves by saying, “Let me know if there’s anything you don’t like”. “Well, for a start,” replied Harrison, “I don’t like your tie.” This led to a succession of jokes being cracked in the studio, which endeared the band to the EMI staff.
As Beatlemania took hold, John Lennon and Paul McCartney dominated the group’s output: “There was an embarrassing period when George’s songs weren’t that good and nobody wanted to say anything,” John Lennon later said. “He just wasn’t in the same league for a long time – that’s not putting him down, he just hadn’t had the practice as a writer that we’d had.”
Known as “the quiet one” of The Beatles, Harrison’s first published composition was Don’t Bother Me, which he wrote while ill in a hotel room in Bournemouth in the summer of 1963. It appeared on their second album With The Beatles. 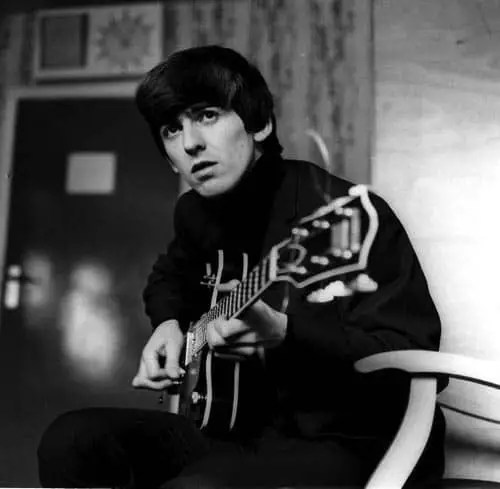 Harrison was later dismissive of Don’t Bother Me, saying “It was a fairly crappy song. I forgot all about it completely once it was on the album… At least it showed me that all I needed to do was keep on writing and then maybe eventually I would write something good.”
During The Beatles’ first US tour, Rickenbacker gave Harrison a 12-string electric guitar – a 360/12 model. The instrument became characteristic of The Beatles early to mid 1960s sound, particularly on the A Hard Day’s Nightalbum, and influenced many other bands including The Byrds.
Harrison sang at least one song on all The Beatles’ albums, though as a songwriter he remained in the shadow of Lennon and McCartney. Following Don’t Bother Me, his next self-penned songs were I Need You and You Like Me too Much, on 1965’s Help! album.
Indian music
George Harrison’s interest in Indian music was awoken by a scene in the Help! film. While making the film, a Hindu devotee gave each member of The Beatles a book on reincarnation, which led to a fascination with many aspects of Eastern religion, culture and philosophy.
The Byrds’ David Crosby introduced him to the music of Ravi Shankar during a US tour in 1965, and he became fascinated by the sitar. He became friends with Shankar, who became his sitar teacher.
Harrison became the first Western musician to play a sitar on a pop record. The song was Norwegian Wood (This Bird Has Flown), on the 1965 album Rubber Soul.

After Norwegian Wood I met Ravi Shankar in London for dinner. He offered to give me instruction in the basics of the sitar. It was the first time I had ever really learnt music with a bit of discipline. Then I listened to Indian music for the next two years and hardly touched the guitar except for recording.

For 1966’s Revolver he recorded Love You To, which featured no Western instrumentation. Following the recording of that album, he went on a pilgrimage to India with his wife Pattie. The couple had met during the filming of A Hard Day’s Night, and married on 21 January 1966.
Pattie introduced George to transcendental meditation, and in 1968 they, along with the rest of The Beatles and their partners, travelled to India to study with Maharishi Mahesh Yogi. Although the band later fell out with the Maharishi, Harrison continued his interest in Eastern philosophy. He embraced the Hare Krishna tradition, and in 1969 produced the single Hare Krishna Mantra by the Radha Krishna Temple.

Cure Those Winter Blues At Home With These Bright Ideas